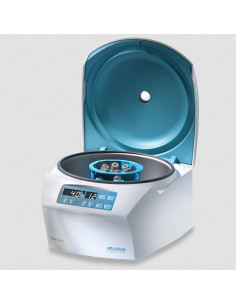 100359
Hettich EBA 270 is a small centrifuge with swing-out rotor, which is especially suitable for medical practices. Centrifuge conventional laboratory tubes to 15 ml at a maximum speed of 4,000 rpm. This corresponds to an RCF of 2254. Due to their 90° rotating rotor, they are particularly suitable for centrifuging laboratory tubes with separating gel.
immediately available
€1,100.00 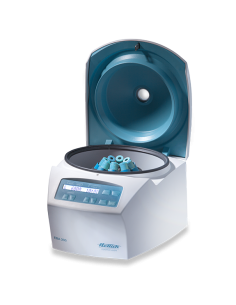 100347
Big performance for the small lab. The Hettich EBA 200 small centrifuge is a practical laboratory centrifuge for small sample volumes.   *Information on the calculation of the delivery date
immediately available
€860.50 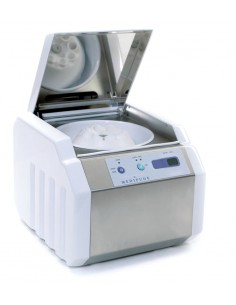 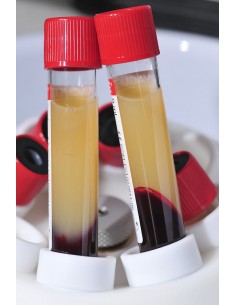 Which centrifuge for PRP?

A "practice centrifuge" is required for the use of PRP in medicine. "Practice centrifuges" are generally referred to as centrifuges that are used for therapeutic treatments, for example, for the production of autologous blood preparations. Therefore, these centrifuges are classified as Class 2a medical devices.

The production of platelet-rich plasma (PRP) from whole blood requires centrifugation to isolate and concentrate platelets. Centrifugation uses the principle of centrifugal force to accelerate the natural sedimentation process. Practitioners who administer PRP with a significant concentration of viable platelets into damaged tissue see increased tissue regeneration and better outcomes.

The preparation of platelet-rich plasma (PRP) from whole blood requires centrifugation to isolate and concentrate platelets. Centrifugation uses the principle of centrifugal force to accelerate the natural sedimentation process. Practitioners who administer PRP with a significant concentration of viable platelets into damaged tissue see increased tissue regeneration and better outcomes.

Blood is made up of red blood cells, white blood cells, blood plasma and platelets. If a vial of blood were placed on a table, the blood would eventually separate into three different layers, with the heaviest parts sinking to the bottom and the lightest rising to the top. Eventually, three distinct layers would become visible: red blood cells (RBCs) at the base, white blood cells and platelets in a very thin layer above the RBCs (also called the "buffy coat"), and finally platelet-poor plasma at the top.

Centrifugation accelerates this innate deposition process and allows physicians to isolate and re-inject platelets very quickly. Under centrifugation, particles in suspension experience a radial force that moves them away from the axis of rotation. Particles with the next density move faster and are separated from less dense and smaller particles.

Platelets are cells in our body that contain nutrients and growth factors that stimulate normal wound healing, just as skin heals after a scratch. A small amount of blood is drawn from the patient using PRP tubes to produce PRP. Once the blood is drawn, the tubes are placed in a PRP centrifuge that spins the blood at high speed to separate the blood into concentrated red blood cells and platelets; Once the blood is separated, the red blood cells are discarded and we are left with concentrated PRP (platelet rich plasma) to be used in the treatment process.

Calculating the exact speed, force and time required to stratify the blood requires a thorough understanding of physics. Many factors affect the centrifugation process, including the width, length and weight of the PRP kit, as well as the speed and force exerted by the centrifuge. In addition, the centrifugal force increases with distance from the axis of rotation. Therefore, a larger centrifuge exerts more force than a smaller centrifuge at the same speed.

Commercially available centrifuges are designed to maximize sedimentation and isolate platelets when used with their respective PRP tubes. Due to the varying weight and size of PRP tubes, some kits require a separate centrifuge, and the manufacturer will establish protocols to optimize the sedimentation process based on the exact size of the PRP tube.

The most important factors to consider in centrifugation are time, speed, and temperature, but few commercial PRP centrifuges have temperature control.

Does this monitoring of the sector lead to different results in orthobiology? Temperature is an essential variable to consider when working with biological material. The high speeds create friction and can heat the sample during centrifugation.

If the sample is heated during centrifugation, the platelets may be prematurely activated